The Boys are at sea on a luxury yacht – called ‘My Big Wet Dream’. Billy Butcher tries to make peace with Hughie, who’s moping on deck. When Butcher asks if they’re all square, Hughie punches him in the face.

Butcher speaks to Mallory on the phone to arrange the handover of Kimiko’s brother, Kenji. Butcher assures Mallory that he’ll “neutralize” Kimiko if she gets in the way of the mission. Kimiko speaks with Kenji, who’s chained up below decks, and tells him that she won’t let the Americans torture him.

A-Train stumbles out of a New York nightclub, as his heart palpitations return. Meanwhile, Homelander tucks into a pancake breakfast with Becca and Ryan – milk is, of course, on the menu. He encourages the boy to come out to play, overruling Becca’s wishes.

On the 99th floor of the Vought Tower, the Seven meet a film director who’s pitching The Dawn of the Seven, a movie telling the story of how the super-group got together – Lin-Manuel Miranda is apparently being lined up to voice Translucent. Stormfront has issues with the script that go beyond mere tweaks – they’re more “global,” she says. The meeting is interrupted when Ashley takes a phone call revealing that Compound V’s existence has gone public – now everybody knows that superheroes aren’t born, they’re made. Even Black Noir is weeping at the news, as the Vought hierarchy refuses to comment to the media.

On the boat, Hughie celebrates Starlight’s success in leaking the Compound V scandal. Mother’s Milk and Frenchie congratulate him, but Butcher’s response is more muted – he says they still have a job to do.

Homelander takes Ryan up to the roof of the house, encouraging him to jump off so he can learn to fly. Now calling Homelander “dad”, the boy pleads that he doesn’t want to do it – so the supe pushes him, and the kid crashes 20 feet to the ground. Becca rushes out. She thinks her son has stopped breathing, but it turns out there isn’t a scratch on him. Homelander belittles Becca for raising the boy to be weak, so Ryan fights back, pushing his father to the ground, eyes glowing like the old man’s. Homelander beams with pride, as the kid tells him how much he hates him.

Frenchie talks to Kenji below decks, and discovers that Kimiko’s brother speaks English. Frenchie gives the prisoner food and drink, and asks for his help in learning Kimiko’s unique sign language. After Frenchie leaves, Kenji uses his telekinetic powers to pick up a drinks can and pull it apart, using the sharp edges to cut himself free.

An NYPD helicopter appears above the boat, demanding that The Boys hand over their “stolen” boat. Kenji, now free, uses his powers to bring the chopper crashing to the sea. Despite Hughie’s protests, Butcher says there’s no time to look for survivors. 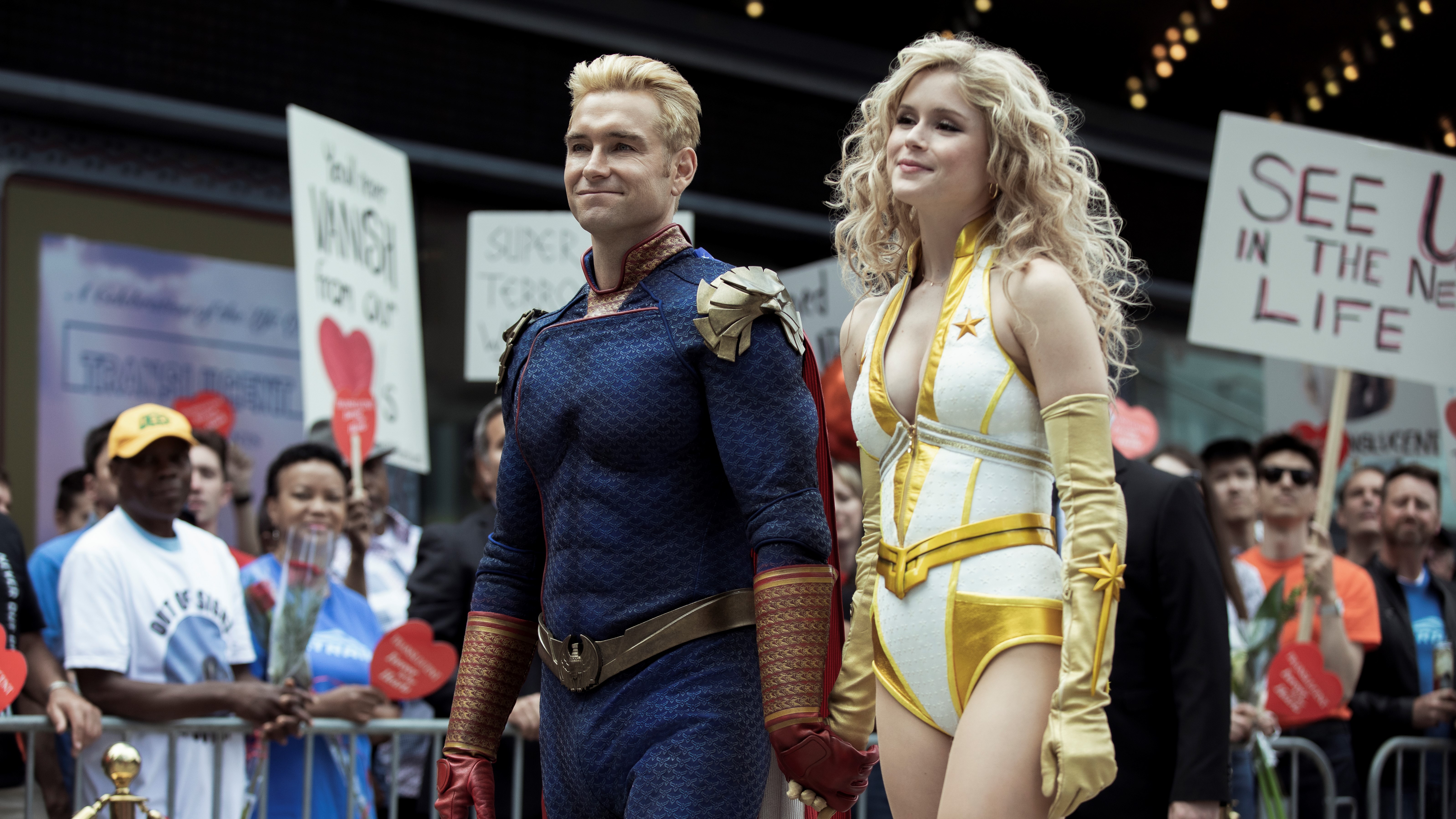 In Ohio, Carol and Eagle see a news report about the boat. They tell underwater hero The Deep that this is his chance for redemption.

Hughie leaves a romantic phone message for Starlight. Quoting Billy Joel’s ‘You're Only Human’, he says that she’s his “second wind” – and tells her to be careful with Vought.

Stan Edgar makes a rare trip to the 99th floor to talk to the Seven, asking that they help the “Vought family” pull together through this difficult time. Homelander vehemently disagrees. He points out that because Vought sees the capes as a product, the Seven have no obligation to the company and should look out for themselves. The downfall of Vought will make no difference to them.

The ‘My Big Wet Dream’ is attacked by a school of angry dolphins. As the yacht starts to sink, the Boys escape in a smaller boat. The Deep appears on the back of a whale, steering his steed to block the Boys’ path to a storm drain. Butcher accelerates the boat towards the whale and impales it. The group end up inside the whale, with Hughie – visibly shaken by current events – refusing to move, until Milk says he won’t go without him.

The Seven arrive at the site of whale carnage, where The Deep is distraught at a sea creature’s death. Starlight tells him there’s no way he’s rejoining the group, while Homelander admonishes him for having a “disgusting” gill showing though his vest.

The Seven pursue The Boys, with A-Train’s high-speed chase through the tunnels interrupted by his heart issues. Starlight finds Hughie and blasts him out of the way. Homelander shows up and – despite Starlight’s protests that they should take Hughie to the authorities – tells her that if she doesn’t eliminate her boyfriend, he’ll kill them both.

Butcher catches Homelander’s attention, as Kenji uses his power to bring the roof down on Homelander. Kimiko and Kenji make a run for it, but Stormfront is in pursuit, using her lightning powers to shoot at them. They end up in a tenement, where Stormfront – revealing her true, racist self – attacks every person of color she encounters, destroying the building as she goes.

On the roof she grabs Kenji, breaking his wrists at the bone so he can’t use his powers. Calling him a “yellow bastard”, she snaps his neck as Kimiko watches, and he collapses to the ground. Homelander arrives at the scene, telling her that the kill should have been his. “You snooze, you lose, gramps,” she replies, showing there’s a new player in town.

At a Samaritan’s Embrace charity drive to support the victims of the tenement disaster – conveniently blamed on the so-called “super-terrorist” – Edgar finally goes public. He claims he knew nothing about Compound V, but assures the public Vought will be conducting a “robust investigation” into the revelations. The late Madelyn Stillwell is the convenient scapegoat for the company’s illegal activities. Stormfront takes to the microphone to take the credit for apprehending the villain, while Homelander gives her evil looks for hogging his limelight.

Identifying the the most despicable member of the Seven has always been a tricky business, but Homelander faces a new contender in the form of new supe on the block Stormfront. Homelander pushing a kid off the roof of a building to test his superpowers and telling a colleague to execute her boyfriend would usually be enough to win any battle of the scumbags. Then Stormfront trashes an entire tenement building chasing alleged superterrorist Kenji, killing numerous people of color along the way. Behind her media-savvy exterior, it turns out she’s colossally racist – a chilling echo of her character in the comics. In fact, her only redeeming quality might just be that Homelander despises her so much.

Even beyond the activities of The Seven, this is The Boys amped up to the max – which is always when this show is at its best. Quotable and explosive in equal measure, the episode also finds space for some tender, character-driven moments. That said you do have to wonder what the writing team have against members of the whale family – the events of ‘Over the Hill with the Swords of a Thousand Men’ make season one’s unfortunate dolphin incident seem positively tame.

Episodes 1-3 of The Boys season 2 are available to stream on Amazon Prime Video now. New episodes appear every Friday.

from TechRadar – All the latest technology news
via IFTTT